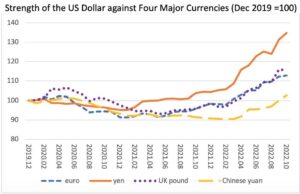 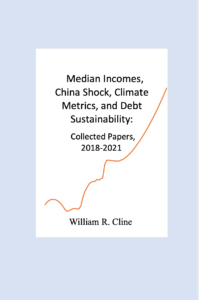 In this collection of his recent papers, Cline first examines US data on median household incomes over the past sixty years, finding that incomes have risen considerably more than the prevailing political-economic wisdom recognizes. His study on the China trade shock finds that US job losses were fewer than half the number estimated in the most widely cited previous studies. He provides new estimates of Fundamental Equilibrium Exchange Rates. He develops a model of the Justified Stock Market Price.

Cline estimates a “reduced form” model of warming against cumulative carbon-dioxide emissions. He also calculates the appropriate level for carbon-equivalent consumption taxes on meat in the United States. He critiques the pre-pandemic trend toward nonchalance about higher public debt, and projects debt and interest burdens rising to precarious levels by 2050. He also provides debt projections for five emerging market economies with relatively high indictors of debt risk.

Debt Sustainability in Emerging Market Economies after the Covid-19 Shock (November 2021). — The Covid-19 pandemic has imposed major fiscal shocks to emerging market economies (EMEs) from output and revenue loss and from relief expenditures and government credit support. In some economies there has been partially compensating alleviation from lower interest rates. This study examines debt burden metrics for 11 major EMEs to gauge the severity of the shock. It confirms the prevalent perception that Brazil, South Africa, and Turkey have experienced the most severe deteriorations in public debt sustainability, and identifies Colombia and India as also warranting caution. Mexico and Indonesia comprise a middle-risk tier; and Chile, Philippines, Malaysia, and Thailand, a low-risk tier. An important difference from debt crises in the 1980s and 1990s is that EME sovereign debt is now primarily in domestic currency and owed to domestic holders, reducing vulnerability to exchange rate depreciation and the relevance of externally coordinated debt relief. Medium-term projections examining the sensitivity of debt burdens to upward pressure on real interest rates find Brazil, South Africa, and India relatively more affected as a consequence of relatively high baseline debt and interest burdens. Overall, so far there has been no generalized slide of the major emerging market economies into unsustainable debt burdens requiring debt renegotiation with partial forgiveness.  However, it will be important for the countries more at debt risk to achieve their baseline improvements in primary fiscal balances currently projected by the International Monetary Fund.  (See Working Papers.)

US Debt Sustainability Under Low Interest Rates and After the Covid-19 Shock (March 2021; rev. June). — US federal debt held by the public rose from 35 percent of GDP in 2007 to 72 percent in 2015, reflecting the Great Recession as well as rising health and social spending, and then to 79 percent in 2019 following the 2017 tax cuts. In 2020-21 federal assistance to address the Covid-19 shock will reach over 25 percent of 2021 GDP. The prolonged trend of declining real interest rates since the early 1980s has reduced the real economic burden associated with a given debt to GDP ratio. In part because of new attention to interest rate versus growth rate dynamics, economic thinking has correspondingly shifted toward less concern about debt levels. Nonetheless, Congressional Budget Office projections adjusted for the $1.9 trillion American Rescue Plan indicate that the interest burden will rise from the recent 1½ percent of GDP to 2.3 percent by 2030 and 8.4 percent by 2050, as the debt ratio rises to 114 percent of GDP and 203 percent respectively.  Feedback from the rising debt ratio boosts the real interest rate in the CBO’s model to about 1 percent by 2030 and 2½ percent by 2050. This study first estimates the ex-post realized real interest rate on federal debt over the past six decades. For projecting the debt burden, it suggests a prudential benchmark at the 33rd percentile in the past distribution, a real rate of 1 percent on the 10-year treasury note. Simulations of the CBO-based projections using this rate, which is higher in the 2020s but lower thereafter, find an interest burden of 4.7 percent of GDP by 2050, far above the average of 1.9 percent over the past six decades. At a real rate of 1 percent, classic Maastricht fiscal targets would shift to about 130 percent of GDP for the debt ceiling and 4 percent for the deficit. However, even these more lenient targets would not be met unless primary deficits are cut to about 1 to 2 percent of GDP, well below their current path rising from about 3 percent of GDP to 4.5 percent by the 2040s as social security and especially health outlays escalate. (See Working Papers.)

Carbon-Equivalent Taxes on US Meat (July 2020; rev. December). — Almost 6 percent of US greenhouse gas emissions come from methane and nitrous oxide in the livestock sector. This study calculates carbon-equivalent consumption taxes for beef, milk, pork and chicken that could accompany fossil-fuel taxes or regulations in the rest of the economy. Beef production is much more emissions-intensive than that of pork or chicken. Methane from digestion of plant material (enteric fermentation), almost entirely from cattle, accounts for almost half of emissions.  At a social cost of carbon dioxide of $75 per ton, the carbon-equivalent tax would be about 20 percent of average retail prices for beef, 4 percent for milk, and about 3 percent for pork and chicken. Compensation to low-income households would be appropriate, as would partial exemption for certified farms and ranches once low-emission feeding and genetic techniques become clearer or widespread testing of animals for enteric methane becomes feasible. (See Working Papers.)

Transient Climate Response to Cumulative Emissions (TCRE) As A Reduced-form Climate Model (May 2020). — This study examines the paradox that the path of realized global warming by a given year is linear in cumulative emissions of carbon dioxide even though the corresponding eventual equilibrium warming is only logarithmic in atmospheric concentration. It attributes this paradox to the legacy effect of a large atmospheric stock of natural and anthropogenic carbon dioxide relative to current emissions, a rising fraction of emissions retained in the atmosphere, and a rising path of emissions.  The study then estimates parameters relating realized warming to cumulative emissions using estimates in Coupled Model Intercomparison Project 5 (CMIP5) for the high-emissions scenario of the Intergovernmental Panel on Climate Change (RCP8.5).  These estimates constitute a transparent reduced-form climate model that can be useful for analyzing the economic costs and benefits of alternative abatement scenarios. (See Working Papers.)

Calculating the China Shock to US Employment:  An Input-Output Labor-Accounting Approach (March 2020). — This study uses input-output labor-accounting to estimate the impact of rising imports from China on US employment.  Our counterfactual analysis incorporates offsets from substitution for imports from other countries, increased US exports to China and induced exports to other countries, and job gains in downstream sectors using imported inputs.  The study finds that from 2000 to 2016, the China shock displaced 716,000 direct and indirect jobs in manufacturing, 14.3 percent of the period’s decline, but created 39,000 jobs in non-manufacturing. The net loss of 676,000 jobs was far below widely cited estimates of about 2 million divided evenly between manufacturing and non-manufacturing. (See Working Papers.)

Fundamental Equilibrium Exchange Rates, November 2018 — This report continued the periodic series estimated by Dr. Cline at the Peterson Institute for International Economics in 2008-17.  (See Working Papers.)  New estimates for May and November each year are available by subscription. Specially tailored estimates (e.g. different base month, additional countries, or addressing specific issues) can also be commissioned.  For information, please contact wrc@econintl. 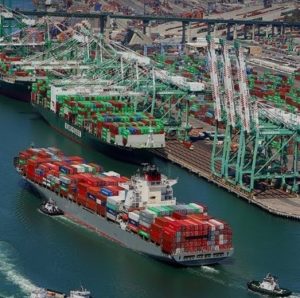 Economics International Inc is a sub-chapter S corporation established in 1981.  In its first decade, it provided the Latin American Economic Outlook on a subscription basis, producing a total of 40 reports on the largest Latin American economies. In 1987 EII published the monograph Informatics and Development.

In the 1990s and early 2000s, EII provided major individual economic studies on Venezuela, Argentina, and Brazil for official-sector and corporate clients, in addition to expert witness work regarding valuation of sovereign debt. From 2006 to 2015 the corporation’s work focused on economic translations. In October 2018 EII launched its website featuring Dr. Cline’s ongoing policy research (see Working Papers).  This site also provides a compilation of Dr. Cline’s past work (see Publications). 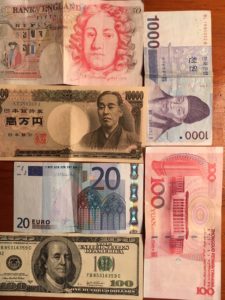 William R. Cline is President of Economics International Inc.  He is Senior Fellow Emeritus at the Peterson Institute for International Economics (PIIE), where he was a Senior Fellow from the Institute’s inception in 1981 through 2017.  He was formerly Senior Fellow at the Center for Global Development, where he held a joint appointment with PIIE;  Deputy Managing Director and Chief Economist at the Institute of International Finance; Senior Fellow at the Brookings Institution; Deputy Director for Trade and Development Research at the US Treasury Department; Ford Foundation Visiting Professor in Brazil; and Lecturer and Assistant Professor at Princeton University.  He received a PhD in Economics from Yale University and graduated summa cum laude from Princeton University.  He is the author of 26 books and numerous articles. 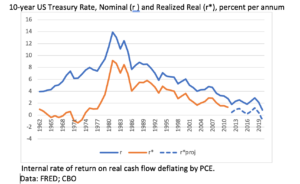 The use of all information and analysis provided at this website is subject to agreement to the terms indicated in this disclaimer.